Starting right at 12:15, President George Lesley provided an invocation: “In Hastings, Nebraska, a group of farmers gathered for breakfast. Farmer Arthur led the prayer. ‘Lord, I hate buttermilk, lard, and flour, but know when they’re mixed and baked, they become warm biscuits,’ he prayed. ‘Lord, when life gets hard and we don’t understand, help us to relax and wait until you’re done mixing, it’ll probably produce something better than biscuits.’ With all of the current difficulties lately, let’s all stay strong because we don’t know what God is mixing. It’ll probably be good.”

It was great to have Al Wach back to lead us in the Pledge. Welcome!

Wally Ziglar asked the group to name the largest aquifer in So. Cal. After a few guesses, he revealed the answer – the Santa Ana River. He also asked each table to guess its “depth.” The amazing answer is 4,000 feet.

President George read a couple of thank you notes, one from James Vale and Bob Rotstan, expressing how much they appreciated the thoughtful presentation of the plaques with flags created by Jerry Nininger. They proudly hung the plaques in their offices. The ladies from the Balboa Island museum wrote to thank the club for the $10,000 grant that will be used to educate NMUSD 3rd graders.

Ed Romeo announced the reopening of the OASIS Senior Center and that on-site classes will begin on April 12th, including the chair exercise class Ed and his wife lead. Their newsletter is distributed to 6,000 households and contains an advertisement for the Field of Honor. On a personal note, Ed recently renewed his driver’s license through 2026, the year of his 100th birthday.

Dave Schapiro announced the speaker for the April 29th meeting, three-time Olympian, two-time bronze medalist, Dwight Stones. Dwight is an articulate speaker and a frequent commentator for the Olympics and other track & field events. 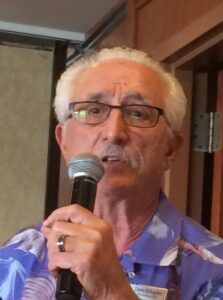 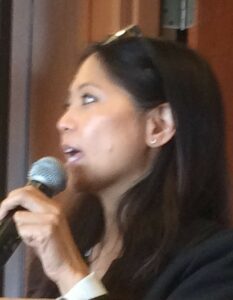 The Director of Development from the Priority Center, shown above, thanked the club for its support and discussed upcoming events. First, this month is Child Abuse Prevention Month and in honor thereof, the Priority Center is presenting the Pinwheels for Hope. Nationwide, the pinwheels represent hope for kids who experience child abuse. A pinwheel will be planted at Lido Village for those who donate $25 or more. Second, Priority Center’s Annual Gala will take place virtually on April 22nd. The gala will feature a live auction and raffle. The fun will include a lesson from a mixologist and a comedian who is a mental health advocate. Please put this Gala on your calendar for April 22.

Originally from Gillette, Wyoming, Denton Knapp graduated from West Point and was commissioned an infantry officer. His service included multiple combat tours, commanding in Iraq and Afghanistan. Indeed, April 7th was the anniversary of his first combat in Baghdad in 2003. Upon retirement, after a brief period back at West Point, he followed his children to California and has lived here for four years. Post-retirement, Denton wanted to dedicate his efforts to children and veterans. Denton became the Director of the Tierney Center for Veteran Services and also serves as Chairman for the Orange County Veterans & Military Families.

OCVMF is a collaborative of 108 organizations that aspire to connect veterans and their families to quality support and services. Denton discussed OCVMF’s goals for 2020-2025 that include defining the OC veteran environment, achieving “functional zero” homelessness, improving public private partnerships, their case coordination and collaboration, reducing veteran suicide and unemployment, connecting veterans and their families with houses of worship and services, and servicing aging veterans.

Denton touched on some of the difficulties and successes. OCVMF has identified by name most OC veterans, including 300 experiencing homelessness. While they have had success in finding homes for many of them, the number homeless has remained stable because those placed in housing are quickly replaced by new homeless veterans. Also, with the assistance of individual volunteers and collaboration with businesses, they’ve helped many veterans find employment. Finally, OCVMF has worked well with the OC Sheriff, Courts, and the jail. OC Jail recently started a program to house non-violent veterans together and to clothe them in fatigues instead of orange jumpsuits. This program has been successful, because once released, most of these veterans have not returned. 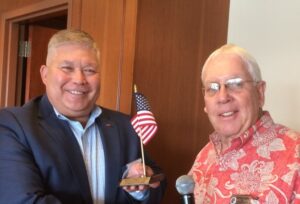 Denton noted that veterans represent 7% of our population. They are typically humble people who are often hesitant to seek help. OCVMF has made significant headway in making it less complicated and more convenient for veterans to take advantage of the multiple services available.

Denton’s employer, the Tierney Center, reopened last week. The center helps all veterans, active, guard, reserve, and even those with dishonorable discharges, as well as their families. The center provides a variety of services including assistance with housing, discharge upgrades, training for employment (e.g., resume building and mock interviewing), processing medical claims through the VA, financial counseling, and assistance. Tierney Center also collaborates with local businesses to employ veterans, including an on-the-job veteran training program, covering half of the veteran’s salary at the beginning.

Tierney Center is still seeking donations. The goal of the completed facility is to be a one shop stop for veterans to receive services. This year’s theme is to identify veterans, asking “Have you or a family member served in the military?” For those who respond affirmatively, the next question is, “What do you need?”

Thanks for sharing your enthusiasm, Denton! Editor and veteran Bob Wood with help from Co-editor Diane Daruty.