Ken DuFour opened with the prayer, asking God to continue our many blessings. Ross Stewart led the pledge.

Gina Lesley asked those who will attend the luau to let her know and for help finding Hawaiian music. Jerry Nininger announced the football book sale, a district fundraiser. He emphasized winning is based on luck and doesn’t require football knowledge. The price for one book is $25 and there’s a price reduction for each additional book with a cap of 5 books for $100.

Mitch Mitchell introduced Lauren Kleiman who is running for Newport Beach Council in District 6. She was born in Long Island but moved to Santa Barbara as a child. She obtained her undergraduate and law degrees from Pepperdine and is an attorney and businesswoman.

Lauren is passionate about being involved in Newport Beach. In 2016, she joined Newport’s Aviation Committee and served a year until she was appointed to the Planning Commission (citizens may not be on multiple Commissions/Committees). She continues her work with John Wayne Airport as part of the Airport Working Group of Orange County. Lauren has been a Planning Commission member six years and was selected as the first female Chair in 30 years. She’s also Vice President of her homeowners’ association and a founding member of the revived Newport Beach Foundation, which raises civic aware- ness in young professionals. At the foundation she started a Parent Education Series.

If elected to Council, public safety is Lauren’s top priority. As Vice President of her homeowners’ association, she has worked closely with, and gained tremendous respect for, Newport’s Police and Fire. She is committed to keeping the Police fully funded and staffed so they can keep the community safe.

Lauren is eager to reduce homelessness. Despite Newport spending millions on the issue, between 2020 and 2022, Newport’s homeless population increased 50% while most neighboring cities achieved reductions. Lauren aims to pursue new ways to tackle the problem that don’t rely upon the police.

Lauren wants to ensure California’s housing policies don’t fundamentally change Newport’s unique charm and character. As a land use attorney and longstanding member of the Planning Commission, she believes she is best positioned to develop strategies to minimize the impact on Newport’s neighborhoods, infrastructure, resources, and schools. 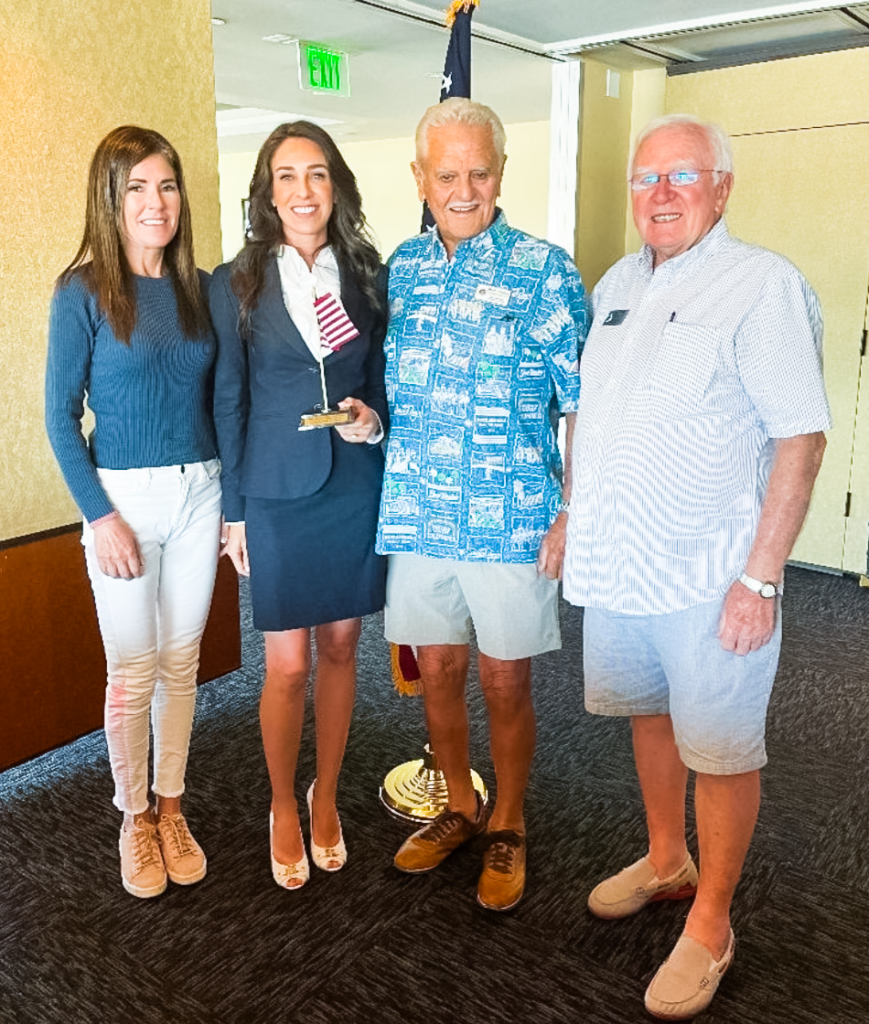 Lauren stressed she’s not a politician and has no aim for higher office. She has the endorsement of Mayor Kevin Muldoon and Council Members O’Neill, Duffy, and Blom.

Lauren was asked why the homeless are lured to Newport Beach. She recognized it’s a complex issue, but believes the OCTA bus depot near Fashion Island, the last stop on the bus line, is the biggest attraction. The OCTA has allowed the depot to become a campground for the homeless.

Lauren shared potential solutions to help reduce homelessness. She contends the OC-TA is breaching its duty under its agreement with the City and Irvine Company to secure the depot area and the City should enforce this duty, perhaps by encouraging OCTA to move the depot elsewhere. She suspects the City has been lenient with OCTA in fear of litigation. She also wants regional solutions for homeless shelters, and for shelters to vary the services they offer to address the many causes of homelessness (e.g., lost employment, veterans, mental health issues, drug use, etc.). If elected, she would closely study the strategies of cities who have succeeded in reducing homelessness and try to implement effective policies in Newport Beach.

Although Lauren recognized Newport’s Be Well van helps with homelessness, she compared it to a concierge service for those with one, specific challenge, mental health. For example, it travels to shave one individual who becomes irritated if his beard gets too long. It drives others to mental health clinics for appointments. Be Well doesn’t offer a permanent solution to move those with mental health issues into long term housing.

Lauren discussed California’s Regional Housing Needs Assessment (RHNA) that is requiring Newport Beach to plan for an additional 4800 housing units including lower and middle income units. She complemented the City’s Planning Department for its vigilance in staying compliant with constantly changing rules, noting this is particularly challenging because the rules often conflict with Coastal Commission requirements.

The Planning Commission prefers to work with local investors with a proven record as opposed to outsiders. It is interested in senior housing projects which should be attractive to developers because they offer density bo- nuses. At the same time, the Commission seeks to avoid dense developments preferring instead options such as student housing and artist lofts. The City is collecting funds from current developers to use for the 4,800 units. Ken asked if the City is pushing back against RHNA. Lauren explained “Greenlight,” a slow growth measure voted in by Newport citizens in 2000, could be an obstacle for the 4,800 units. Newport has a General Plan, a legally-binding vision of its future growth setting forth development limits. “Greenlight” restricts the amounts by which Council can increase the General Plan’s development limits over a ten-year period without voter approval. If the State approves Newport’s plan for the 4,800 units, Greenlight will require it to go to a vote of Newport residents. Lauren suspects the residents will reject it and the matter will land in court. The City is closing following Encinitas which is ahead of Newport in the RHNA process. Encinitas has a slow growth measure and its citizens rejected its approved RHNA plan. The matter is being litigated.

Lauren highlighted hat RHNA requires the City to plan for 4,800 units, not to build them. If a plan isn’t approved in a timely manner (the deadline continues moving), the City will be charged a steep, daily fine.

Lauren drew the winning numbers for the raffle. Gail Demmer and Marj Davis each won $22.


This week we will be at the Bahia Corinthian Yacht Club. Lunch will be served at 12:20 pm. You will be emailed an invitation two days before the meeting. Please notify Richard Swinney by this Wed 2 PM if you are planning on attending.