President George Lesley opened the meeting with Zoom attendees captured by Steve Pools’ phone and skill. Franny Murphy, shown here, was introduced as a guest of George, who then called on Ken DuFour for a blessing, which included asking for God’s healing for long time member Tom Naughton. Mitch Mitchell, returning from the virus attack, led us in the pledge.

Ken DuFour reported on the recent purchase of a new storage container (at below cost) installed in the City Yard last Tuesday with the wonderful help of Ross Stewart and Jerry Nininger. It is now repainted. George noted that his neighbor Al Wach feels better but is not quite ready to come to our meetings because of problems walking. August birthdays included Tom Naughton, Jerry Nininger, Steve Pool, and Jeff Yeargain. (No, you didn’t miss the cake---we’re not back to “normal” yet.) He was pleased to announce that Cynthia Strasmann has agreed to be a co-chair with Mike Campbell the ACE project this year. See page 1 for upcoming programs. 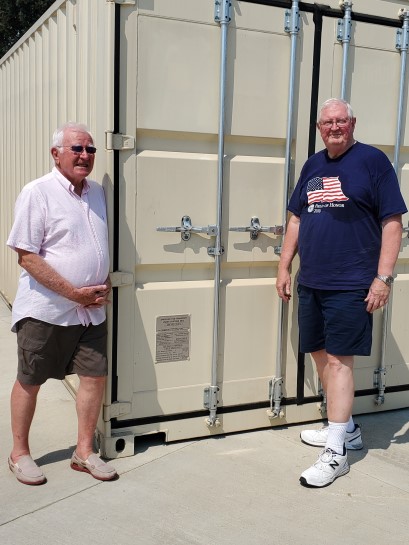 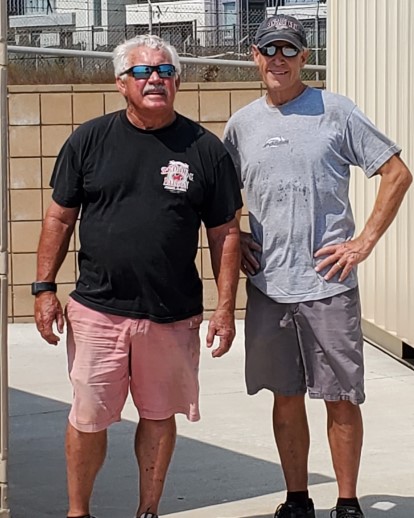 was introduced by George also, who misses the “three-minute talks” our members used to give, and we got two of them today, wonderful 20-minute talks from two well-known members.

He grew up in Burbank and Granada Hills, and he was a musician, playing the piano, trumpet in the marching band, and baritone. He liked golf a lot, and did varsity golf, but then became a race car driver. At 17, he learned to fly, then picked up skill playing tennis. His family moved to Ogden, Utah where he learned to ski and became a Ski Instructor. Besides obtaining a BA in Chemistry and Biology, he decided to attend culinary school then did a round-the-world hiking trip thru Africa and Nepal.

His father ran a big company, and he became a facilities engineer working there but decided he wanted to get more education, so he got an MBA in Cape Town, South Africa, and worked in Bangkok, Thailand. He came to Newport Beach and joined a ski club, met his wife there. Got a CPA & CFP license and worked in finance, then looking at the increasing values in real estate, founded a business called Seapointe Capital, his current business enterprise.

Craig has a brother who is a successful film composer, and a son who’s in the middle of planning a wedding, and daughter who is a Broadway Producer. Thank you, Craig, for your fascinating life story -- so far.

Announced he was the “longest” member of Exchange, joining in 1964, and is very proud of our club, being President twice (’67 and ’78) and is about to be president again next year for the third time. Born in Brooklyn in 1939, Mike’s father owned a haberdashery and was a very social guy. He met one of his friends he much admired who was a CPA, a tax lawyer, and an attorney, and he decided he wanted to “be like him.”

In the 50s and 60s, he was involved in Brooklyn Rock and Roll, went to high school, and played the piano, clarinet, accordion, and drums, and seemed to be very good at it. Then came cars…and girls. The cars sort of won out. He attended the Univ of Pennsylvania, then Columbia, and finally NYU for his taxes training, but he was racing cars all the time. He knew one of the Ford dealers who used an ambulance as a service vehicle, and that seemed like such a good idea, he bought the ambulance and used it haul cars around. With his ambulance he never got tickets.

For adventure, he took a trip around the country as a respite for being a “Good Humor Man” in Brooklyn. He did take the NY bar exam, passed, and decided he wanted to come to California. He lined up another couple of guys to drive non-stop West taking turns driving, and the driver of the moment flipped into a ditch, damaging the trailer and the extra car. The two guys went onward, but Mike stayed and got the car fixed, and came to California that way. Unfortunately, the car was stolen after he fixed it up. Mike heard of a job in Newport Beach and has been here 50 years with the same enterprise.

Mike’s first wife was Judi, who had two sons, and together they had a son who is now an eye surgeon on the East Coast. He later married Victoria and had son Jake, who became an IT guy. During his career, he took up gymnastics as a hobby and won first place in California for the “over 55” competition. He was married to Victoria for 25 years and is now with Jolee. He wants kids…but not yet. Mike was sponsored by Doubledee in this club.