There were 22 members in attendance at the Bahia Corinthian Yacht Club on a beautiful afternoon. It was our monthly business meeting, and no guests were invited.

The View From the BCYC Dining Room

Pres. Ken DuFour opened the meeting and had our Jack-of-all-Trades, Dr. Bob Wood, lead us in the opening prayer. Of note, Bob prayed for a speedy return to health for our President-Elect, Shirley Lashmett; who recently tested positive for Covid-19; and long-time member, Jeff Yeargain, who is preparing for a surgical procedure. Dave Schapiro then led us in the salute to Old Glory.

Pres. Du Four announced that Secretary Richard Swin- ney is celebrating the only member’s birthday which falls during the month of July. However, Richard is currently participating in an off-road event sponsored by Ford Motor Co. in Moab, Utah; and so we celebrated his birthday in his absence.....Cynthia Strasmann, our A.C.E. Awards Committee Chair, thanked members of that committee, Fran Murphy, Gina Lesley, and Gale Demmer, for their assistance with this year’s enormously successful program. Cynthia also mentioned that she maintains contact regularly with the students who have received the A.C.E. awards to see how they are doing.....Our Quiz Master, Wally Ziglar, entertained us with his latest question: “What is the oldest known tree?” It was answered correctly as a bristlecone pine by 3 of the 4 tables at lunch. The tree is located in the White Mountains of Northern California, and has been proven to be 5,065 years old!

Pres. Ken DuFour briefly reviewed the minutes of last week’s Board meeting. Nine of the 12 Board members were present at the meet- ing; in addition, Past-President Jerry Nininger and Spindrift Co-Editor Diane Daruty were also in attendance.
Treasurer Dr. Bob Wood presented his report. He noted that, because of inflation and the resultant downturn in the economy (and the stock market), there has been a significant decrease in the value of our investment accounts, which may impact our ability to continue to donate to worthy causes over the near future.....Roy Shlemon, who chairs our Fundraising Committee, presented his report. He mentioned that, in the past, our major fundraising event has been the First Run Movie Event, which has been held at the Lido Theater and associated parking lot. At this event, a movie has been shown before its release to theaters, and the club has gotten local restaurants to participate and provide food and drink to those who purchase tickets for the event. We currently are not scheduled at this time because the Lido Theater has remained closed for renovation until further notice, and because of the inability to obtain a suitable alternative venue.

Other fundraisers include the Sportsbooks, which are sold through the CA/NV District Exchange; and the Football Pool, conducted and coordinated by our Football Commissioner and Immediate Past-President Mike Gertner (Ed. Note: and of course, our Field of Honor, which has generated a significant amount of income this year). .....Cynthia Strasmann, who chairs the Youth Programs Committee, presented her report, which included the funding of 4 student recipients of the A.C.E. Awards program. Cynthia is in contact with the Newport Mesa Unified School District’s Coordinator of Arts Programs in an attempt to expand the Patriotic Art Program to more of the elementary schools in the District. She also mentioned that Gale Demmer will be co-chairing the Young Citizenship Award with Dr. Bob Wood.

Today’s member presentation is no other than Dr. Bob Wood, our Treasurer, Senior Editor of the Spindrift, and member of a number of important committees in our club; beside being arguably our most intelligent club member. Bob is a young 94 years of age, born in Ithaca, NY. He attended Little Falls H.S., and graduated from the University of Colorado with a B.S. in Aeronautical Engineering in 1949. He received his Ph.D. in physics from Cornell University in 1953. Dr. Bob married Charlotte, his first spouse, at the age of 23, and they spent 48 years together. At 72, he married his present spouse, Lynda. Bob had two off-spring: his son, Ryan, now 66 years old, and a daughter, Denise, who has passed away. Together, his children have produced 5 grandchildren.

Bob is a veteran, and was drafted in the U.S. Army, during which he published 2 scientific articles relating to his research on ballistic missiles. He moved to California in 1956, where he resided in Santa Monica, then in Pacific Palisades, and now in New-port Beach, where he has been since the 70’s. Bob was employed by Douglas Air- craft for 43 years. 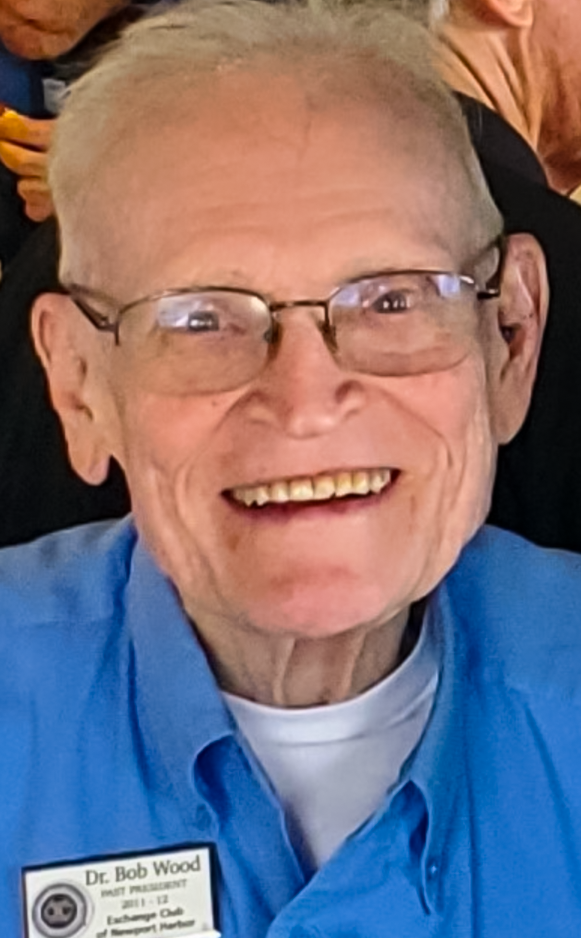 Dr. Bob’s hobbies were birding and stamp collecting. He currently is active in his church, and his present occupation is keeping track of expenses as Treasurer of ECNH, a post of which he has held for 6 years. His plans are to retire “soon”, perhaps writing a book. Bob has also been editing a series of books entitled “Selected by Extraterrestrials” and is regarded by locals as an expert on UFOs, although he admits to not having been Bob joined Exchange in 1999, at the behest of Tom Norton, his sponsor. He is planning on living a long time, and he stays healthy by going to the gym and working out regularly with a personal trainer.

Immediate Past-Pres. Mike Gertner inducted 3 new members at the meeting: Mike Call, Andrew Shortt, and Scott Terry. They are now officially members of the Exchange Club of Newport Harbor, and collectively we welcome them! 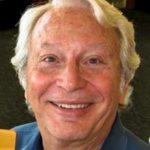 This week we will be at the Bahia Corinthian Yacht
Club. Lunch will be served at 12:20 p.m. You will be emailed an invitation two days before the meeting. Please notify Bob Wood immediately if you are planning on attending.