The 98th Annual CA/NV District Exchange Clubs Convention took place at the Hilton Garden Inn in Irvine on Saturday, June 25th. During the Opening Ceremonies on Saturday morning, our Shirley Lashmett, who co-chaired the convention, presented a preview of the 104th Annual National Convention, which will be held in Greenville, South Carolina on July 13-16th. If you are interested in attending, please see their website or contact Shirley for more information.....Incoming ECNH President Ken Dufour offered the Invocation preceding the presentation of the A.C.E. Awards. This year’s female winner was Caitlyn Roum, who was sponsored by our Newport Harbor Exchange Club, and received a $2,500 award from the District. Kudos to Cynthia Strasmann, who worked so hard to produce the eight finalists that were sponsored by ECNH!....At the Installation banquet, which was attended by Roy Shlemon, Ken Dufour (and Lorrie), Dave Schapiro, (and, of course, Shirley Lashmett), Ken received the 2022 Exchange Club District Member of the Year Award for all his hard work and contributions to our Club. Well deserved, Ken!....In addition, Ken was installed as a District Director representing Division Three (Newport Harbor and Costa Mesa). 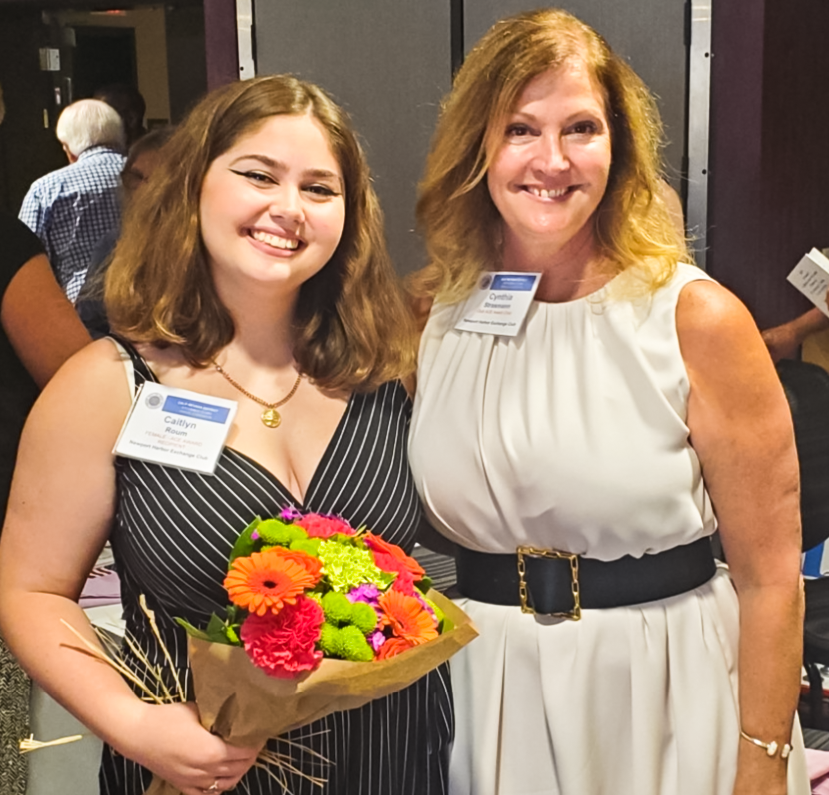 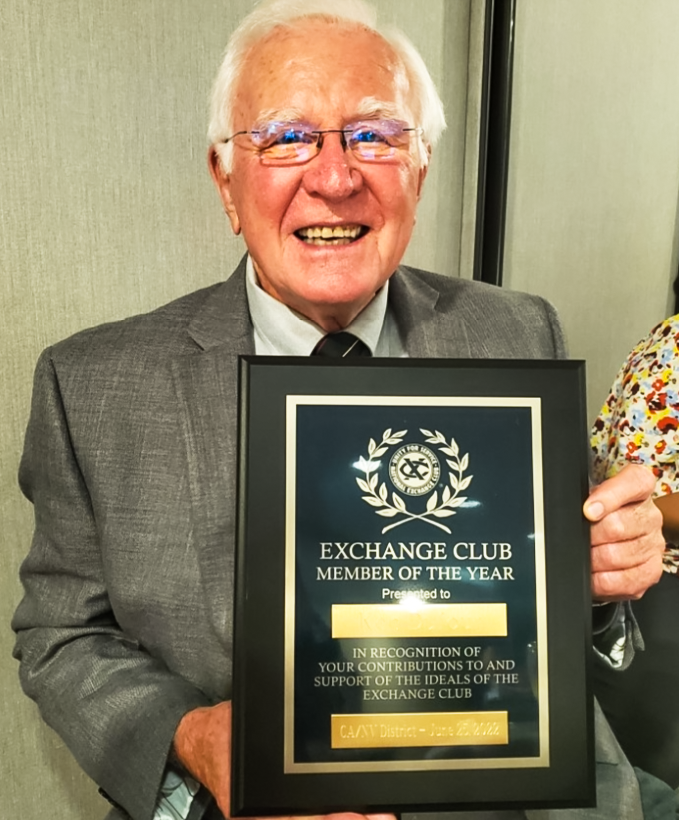 There were a total of 37 who had lunch at the BCYC in celebration of Spouses Day this week: 26 of whom are members. Five spouses in attendance were Ron Lashmett, husband of Shirley; Bob Kinton’s wife, Lore; Mary Romeo, wife of Ed Romeo; Jody Swinney, spouse of our Secretary, Richard; and Jeanne Nininger, wife of Jerry. Also having lunch were Tom Bowers, guest of Scott Terry; Bonnie Barrington, widow of Bob Barrington, who was a long-term member of ECNH and guest of Mary and Ed Romeo; John Morgan, who is an honored guest of George Lesley; and our very special guests, Marina Medinska and Max O staff, members of a family from the Ukraine, along with their sponsor, Victoria Gillis, who were our featured speakers for the day. Outgoing Pres. Mike Gertner opened the meeting; our Treasurer Dr. Bob Wood provided the opening prayer; and Dave Schapiro led the group in the Flag Salute. Lunch ensued.

Wally Ziglar reported that a long-time member of the club, Frank Jank, passed away a few days ago.....Pres Mike notified us that member Roger Summers, who in his previous life was a chaplain, suffered a stroke last week. He is currently at home; we wish him a speedy recovery.....A sign-up sheet was passed out for our club’s Installation Dinner, which will be held at the BCYC on Saturday, July 23rd.

Cocktail Hour with hosted wine bar will begin appropriately at 5:00 pm. Please contact Richard or Ken if you are planning on attending but have not as yet signed up.

Secretary Richard Swinney introduced our speakers, Max and Victoria, along with Max’s mother, Marina. Victoria is the family’s sponsor, and has been housing them and providing them with everything that they have needed since their arrival. Max was the primary speaker, and Victoria supplemented with a lot of important information about the trials and tribulations of a family who fled the Ukraine in mid-April, beginning in Romania, and continuing through Bulgaria, Paris, Mexico City, Tijuana, and finally the U.S. border. It took at least a week to make the trip, and they each had only one suitcase of their belongings. 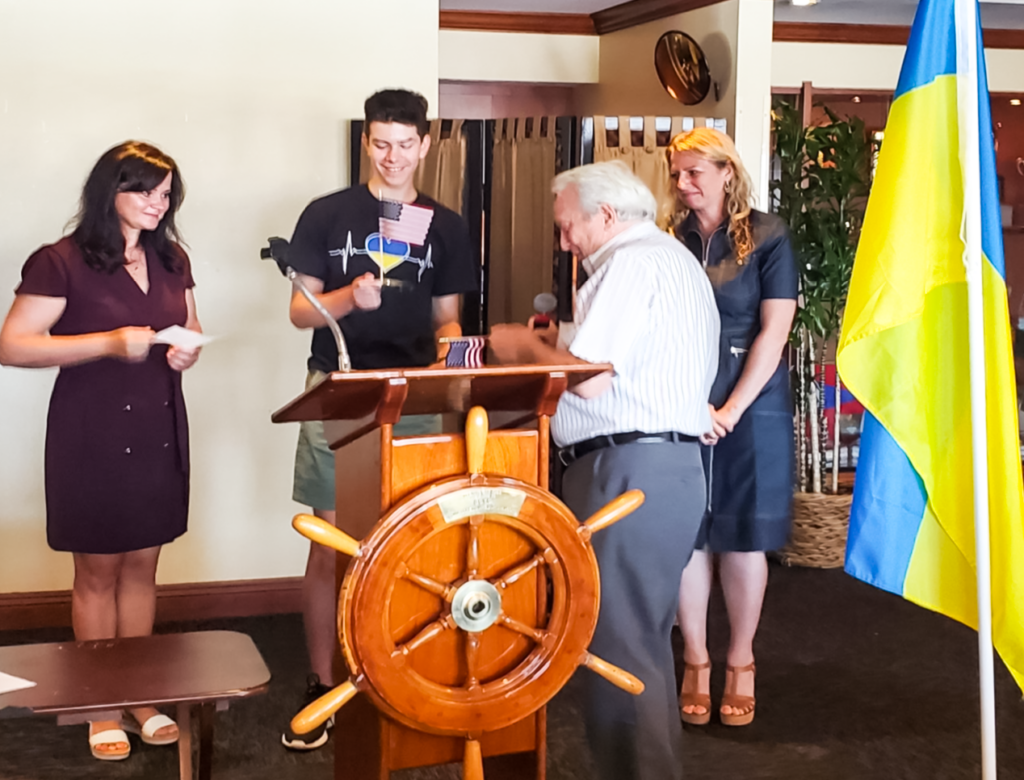 Max is an only child, and his father still remains in the Ukraine. Max expressed his gratitude for being here, where they feel safe, and they are grateful for the overwhelming support they have received since they have been here. Victoria commented that over 10,000 Ukrainian refugees have crossed the U.S. border, which was closed shortly after they arrived; immigration for more recent refugees is more complicated, requiring sponsors, work permits, and significant delays in the process. We were surprised to learn that Max, who is well over 6 feet in height, will be 15 in mid-July. He is enrolled at University High in Irvine, where he will enter the 10th grade in September, and will be focusing his interest in computer science and math. He has good command of the English language, as his generation of Ukrainians are taught English in school; but earlier generations, like his mother, were not. Because of governmental censorship, Ukrainians have had limited communication with the outside world, although Max stated that he has been communicating with friends and family by video calls. Victoria stated that there is little likelihood that Russia will back off on its aggressive policies, even if something should “happen” to Putin; but Max thinks that the Ukraine will eventually win this war because of the worldwide support that they have been receiving. Member Leo Fracalosy commented that America has been long regarded as a melting pot; our society is always enhanced by adding to our culture; and that 99% of the American people have 100% respect, compassion, and support for the Ukrainians. Following the presentation, Pres. Mike Gertner presented a check for $1,000 on behalf of ECNH to the family to help them along.

RAFFLE – This week’s raffle winners were Ed Romeo (again!!) and John Morgan (George Lesley’s guest), each of whom pocketed $42. Kudos to our raffle ticket czar, Shirley Lashmett, for making our luncheon meetings even more interesting!

EDITOR’S COMMENTS – I’m back, and I sincerely wish to express my gratitude for all your support, flowers, and expressions of sympathy during a very difficult time. Thank you all so much! D.S.

We meeting at the Bahia orinthia Yacht Club. Lunch will be served at 12:10 pm. You will be emailed an invitation two days before the meeting. Please notify Richard Swinney by Wed 2 PM on the day prior to the meeting if you are planning on attending.