President Mike Gertner began his term as presiding officer by directing our resident chaplain, Roger Summers to give the invocation. Roger expressed gratitude for ourcountry and its constitution; for our families; and for the food that we were about to partake.

Craig Boardman then led the attendees in the pledge. There were 25 at the luncheon last week, including Donna Shockley, an honored guest of Shirley Lashmett, who met one another at this year’s Field of Honor. Dessert (mini Bundt Cakes) was supplied by Leo Fracalosy in honor of the resurrection of Mike, our “New President”, who has been a member of our Club since 1971 and has previously served as our CEO in 1978. 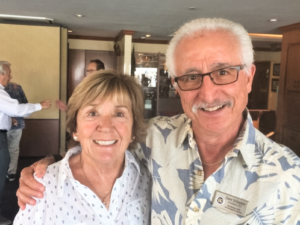 Treasurer Dr. Bob Wood announced that “dues are due”, and that invoices were passed out to all who attended. Although he has been serving as money monitor for the past 6 years, Bob admits that this is still a learning experience for him, and that in recent discussions with past money-hoarder Jerry Nininger, he has discovered that there are members who have been delinquent to a greater or lesser degree, and that they may be getting a note from him in the near future to pay up as a friendly reminder! Dr. Bob also reported that Buddy Ryan had been hospitalized the past month, but is now home and recuperating; also, that Harlan Pauley is recovering from thyroid problems, and will be rejoining us soon; and that John Kruse’s wife, Paula, was victim of a break-in and robbery at her home while she was traveling.....Garry Tewinkle admonished Pres. Mike for “misplacing” the gavel which was presented to him at his inauguration, and is now in Garry’s custody. Garry suggested that Mike pay a $100 “penalty” to one of the charities that are supported by the Club prior to its return. Mike retorted that the gavel was stolen from him, but didn’t name the suspect. Ed Romeo announced that the Oasis Senior Center has reopened, and encouraged all to become members of the Friends of Oasis.

Our featured speaker this week was Joe Brown, who has been a member of ECNH for 11 years, and his presentation was very creative and hilarious, to say the least! The subject of his discourse was “Joe’s Pathway to Becoming an Attorney”. Prior to his talk, he mentioned the Newport Beach Literacy Program, a program for adult literacy which is housed at the N.B. Public Library but operates independently. Joe has been associated with this program for 9-10 years. You would be surprised at the number of English speaking adults who are residents of this area who cannot read! Joe mentioned that there are currently about 120 students and about 80 volunteer tutors in the program. Joe said that our Club has donated to this program in the past, and is hoping that we will continue to do so.

Joe’s path to becoming a lawyer began in high school in Omaha; he wasn’t very much of a student. Joe was primarily interested
in sports, and wasn’t very good with books. His track coach told him that, as a runner he had very deceptive speed: he was much
slower than he looked! On one of his report cards, he got one D and 4 Fs, so his coach called him in his office and told him that he was spending too much time on one subject(!) 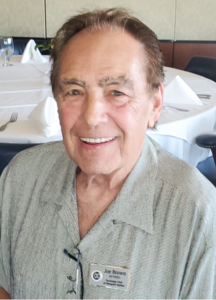 In his quest to get an education, he began to analyze various subjects to determine what best suited him for the long term. He first studied math, where, in the 4th grade he was impressed by the fact that 2+2=4. Later on he studied Euclid and Ptolemy; French mathematicians in the 17th Century; and Fibonnoci Numbers, used in architecture, art, stock market, etc. etc. Calculus came easy for him, but he found little interest in applying the math, so he looked toward chemistry; he read a book on the element helium, which he couldn’t put down(!). He had to memorize the Periodic Table; when he got to #86 (Radon), his memory bank was full. In lab, he took out his Bunsen burner, petri dish, etc., but lost an electron. He reported this to his instructor, who asked him if he was positive(!!). He found it difficult to understand isotopes, entropy, and absolute zero. Joe discussed Boyle’s Law, and going back to the study of alchemy. When his chem teacher explained catalysts by using the math expression 2+2=8, this ran against what Joe learned in the 4th grade, and he wouldn’t buy into it; Joe and chemistry did not bond (!!). He then studied physics; he mentioned quantum entangle- ment, where a particle in space can have an effect on another particle tens of thousands of miles away. He mentioned Max Planck, who theorized that the smallest particle can be no smaller than 10 to the 35th power. He mentioned critical mass, which his professor compared to a nuclear explosion where 2+2=100, which again contradicted Joe’s 4th grade math education(!!). Joe was looking for simplicity, and when perusing a college catalog, the subject “LAW” intrigued him. 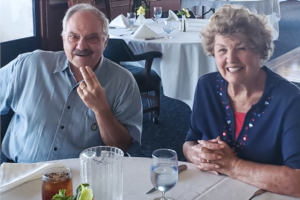 When he visited a law library, he was discouraged because there were large volumes of books pertaining to the law, but not one book with pictures, charts, or graphs (!!). Joe’s favorite books had always been coloring books (!!). In line with his pursuit of simplicity, he was thinking about not going into law when he encountered a picture of Moses, holding the tablets imprinted with the 10 commandments in Hebrew. All the Jewish laws were inscribed in the Torah (the first 5 books of the Old Testament), containing just 600 laws and statutes. This was simpler; what made it more so was when he encountered the Law of Loopholes book in the law library. Joe then learned the law using just the Bible and the Law of Loopholes!(!!) Way to go, Joe!

Luncheon meetings at the Bahia Corinthian Yacht Club have resumed, with indoor seating in one of the banquet rooms. Lunch will be served at 12:00pm. You will be emailed an invitation two days before the meeting. Please notify Richard Swinney by this Wed 2PM if you are planning on attending.