President Mike opened the meeting by calling on Ken DuFour for the invocation, who called on God to bless the young ones and the older ones in the room. Bob Kinton led us in the pledge.

by Richard Swinney about the Field of Honor in Castaways Park, with the opening ceremonies on Saturday, 21 May, with a band. He noted that he needs about two people to help next Tuesday to prepare for the Marines, who will put the rebar and flags in on Wednesday.

Today was the Youth of the Year, where we recognize excellence in a boy and girl from each of four local high schools by presenting them with a plaque and a check for $3,000. They will receive the checks during their senior awards ceremony.

From Estancia High School, counselor Carrie Smith is shown with Lily Shandalove, who played volleyball, ASD President, Best Buddy, medical academy and is going to UC Berkeley, Dane Dodge saw his kid brother win a dictionary for the patriotic essay at Victoria from our Exchange Club. Water polo captain, ASD Treasurer, Best Buddies Club VP, He will be going to Cal Poly SLO to study investment technology. (Mike Gertner commented that his own son got an award from Estancia of maybe $200 25 years ago.) 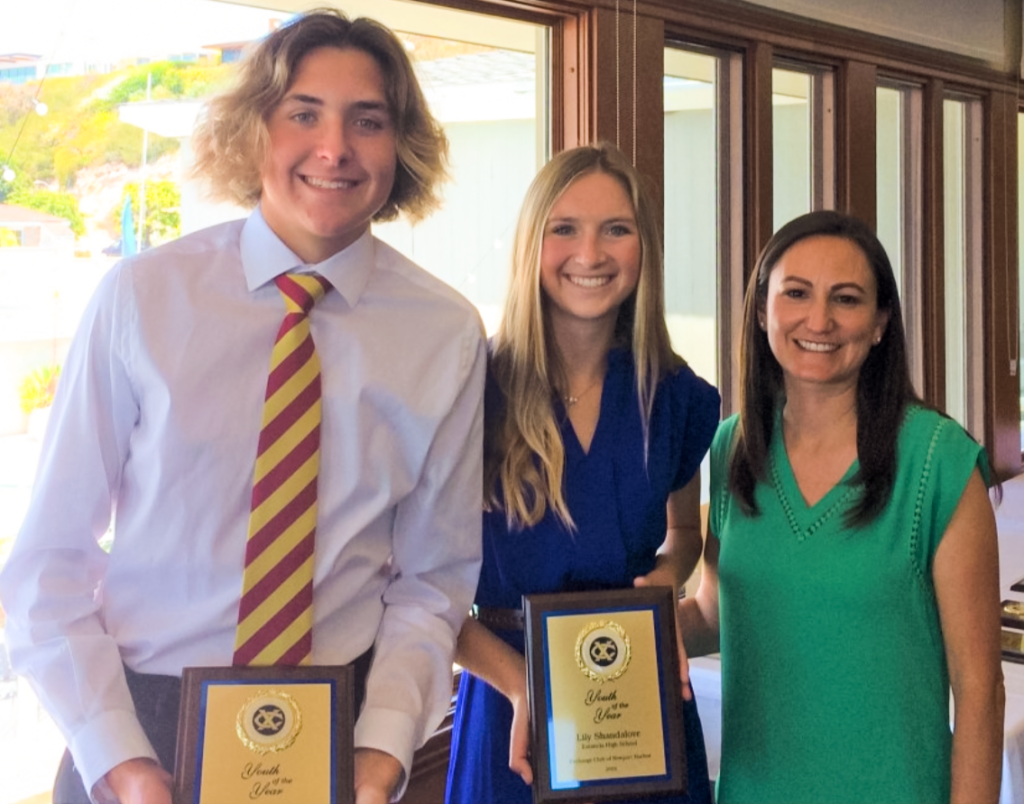 From Costa Mesa High School, their Principal Jacob Haley, was personally present but one of the two students had a funeral and the other had a mandatory assignment and both were unable to attend. We show the principal holding their two plaques, and we were honored to have the principal at- tend. Aiden Spallone played basketball, and Principal Haley’s favorite story: in the CIF semi final, down four points, made eye contact with Dane, who won the game with a three point steal. Receiving State Seal of biliteracy in English as well as Spanish. Will attend Univ. of San Diego to study business. 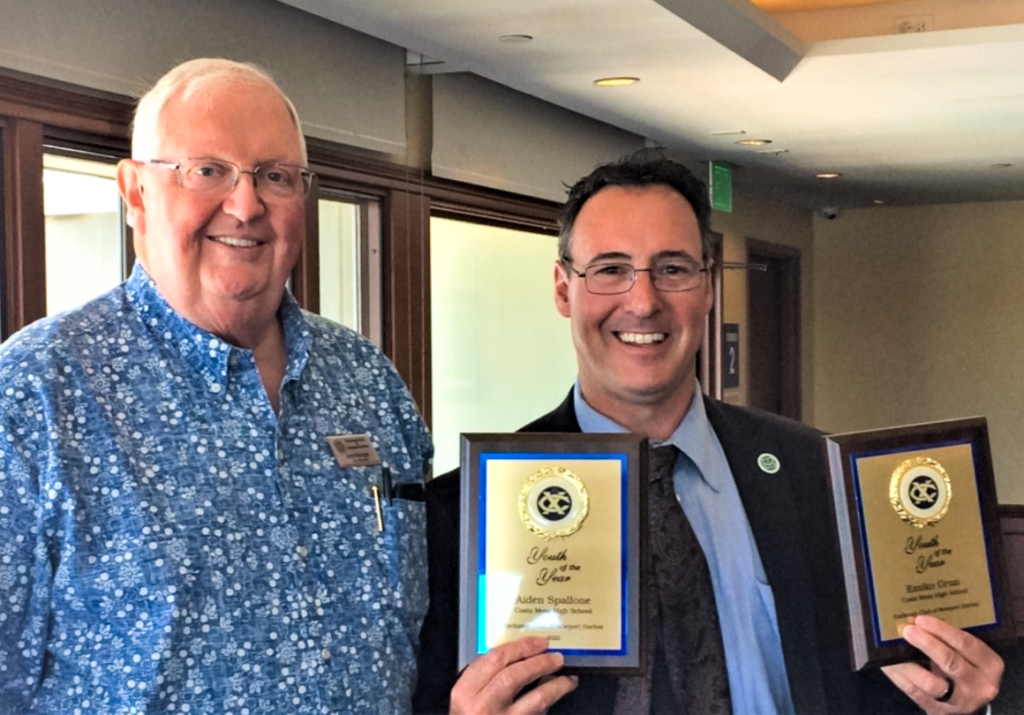 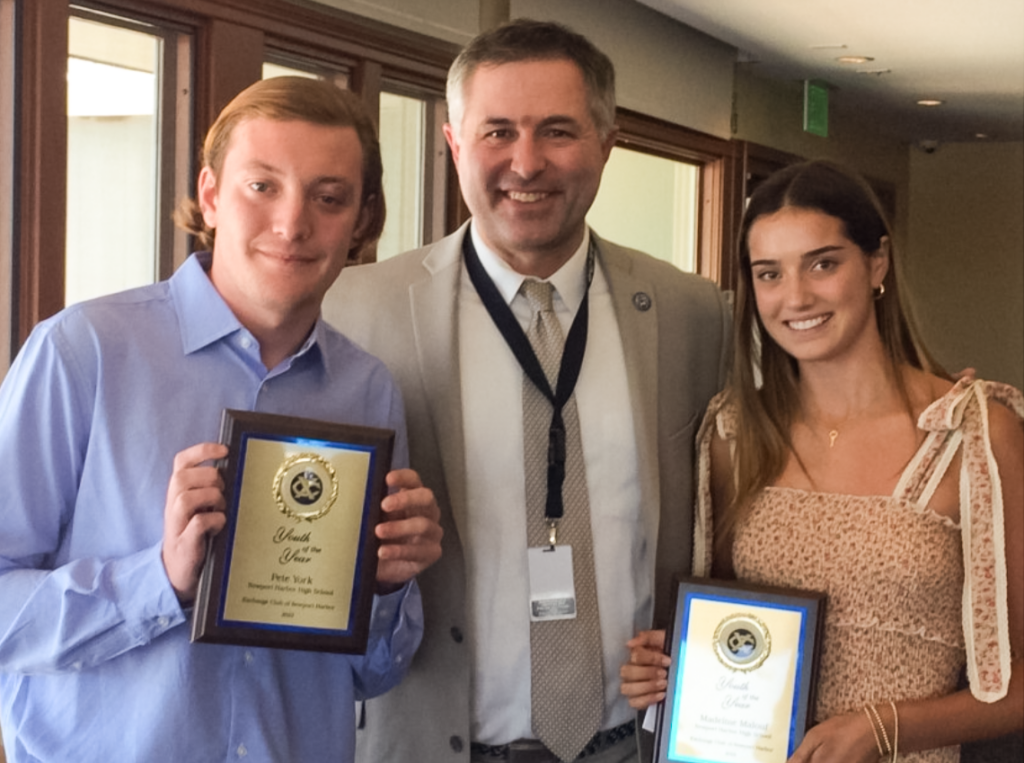 From Corona del Mar High School, we had Gina Nyeholt speak about Alex Sunday. He is sweet, kind, gentleman, respectful, and very very humble. Parents: you have raised a wonderful young man. VP Science Club AI, virtual labs to 19 students. VP of HS. Started 501c3 for all girls school with virtual labs. Preserving mentalhealth of our physicians in Newport Beach and Irvine. Regional leader for all of California. How AI will affect people. Working with “AI-Inspired”. From 5 to 80, Never too late to learn about AI and technology. Look forward to going to Harvard and majoring in bio engineering.

Principal Charles Oxas on Francesca Disanto. I can’t wait for her to get to NYU. Wish I was 18 again, going off to college. 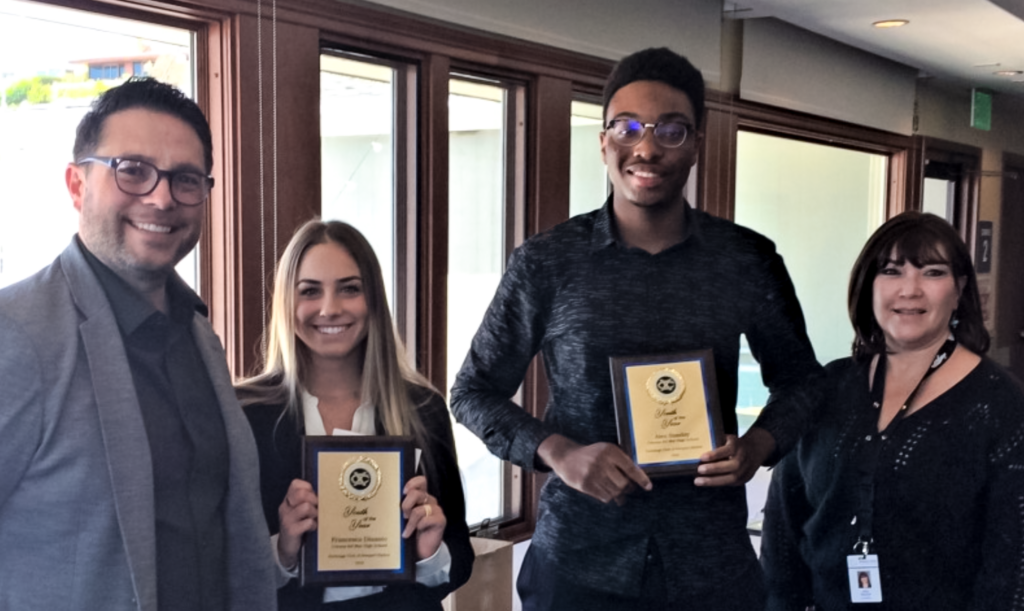 Francesca Disanto. In my four years, I’ve learned many lessons. Will go to NYU, where I’ll be studying hospitality and marketing management. I also am looking forward to doing a double major, plan to do education abroad and continue on to graduate school Thank you again for your scholarship and to my Dad, who supported me every step of the way.

GENERAL COMMENTS -  Jerry Nininger has been doing this program for 15 years. He never ever saw a student win with less than a 3.8 GPA. Sports,, drama, publications, bands are typically parts of the winners’ involvements. And now culinary!

Nice to have three principals here today! Not often do we get the top dog!

Mike concluded the program by inviting the winners back in a year should they be available.

May 26  -  Accepting the Challenge of Excellence