President Ken DuFour opened the meeting with a brief moment of silence in remembrance of the tragedy of 9/11 (now recognized as Patriot Day), and of the roughly 3,000 people who perished on that fateful day 18 years ago. Ed Romeo led the flag salute, followed by the cattle drive to the trough.

NEWS AND VIEWS - Ken DuFour has established an ad hoc Presidential Advisory Committee to brainstorm options related to both fundraising and increasing our membership. An attempt will be made to raise funds from philanthropic foundations such as Eckstrom, Segerstrom, etc. for activities which are unique to our club, e.g. Field of Honor, A.C.E. Awards program, and child abuse prevention.

Our President-Elect and resident accountant, George Lesley, was this week’s greeter. An active member of our Board of Directors, he is currently actively involved with the daunting job of obtaining both a movie and a venue for our annual Movie Event. With the temporary closure of the Lido Theater, he, unfortunately, hasn’t been successful in the short run, but he’s continuing the plan to have a movie event next year.

ANNOUNCEMENTS – Our Treasurer Dr. Bob Wood announced that there were no winners for either of the two Monday Night Football games last week, which meant that the club got to keep the proceeds! Mike Gertner reviewed the results of Week #2 of the traditional football pool, with Mitch Mitchell winning the $26 grand prize, Shirley Lashmett coming in second ($5), and Seymour Beek getting the booby prize for lowest score ($3).

PROGRAM - VP of Programs and Speakers, Mitch Mitchell, announced the speakers from the L.A. Rams Organization: Dustin Ouellette, Megan Geier, and Jascna Wilson, who collectively presented an update on the progress of construction of the new football stadium in Inglewood, which will be the home for the team beginning with the 2020-21 season.

The floor of the stadium is 100 feet below ground level, with five levels of seating, and a tremendously large video board. The stadium itself will be part of a large complex including retail establishments, restaurants, a gambling casino, and flat surface parking for over 10,500 vehicles immediately surrounding it. Two large plazas will be surrounding the main entrances on both the north and south entrances of the stadium. The area is larger than Disneyland!

Season ticket holders and club members will be assessed a one-time 50-year lease (seat license) which will lock you into your seat for as long as you want, and then there will be the price of tickets for the season in addition. The cost of the seat license can be substantial, e.g. $200,000 per seat on the high end and $5,000 on the low end, with a wide range of pricing and seating options in between; the seating license is completely refundable when you no longer wish to have it. Pricing for individual games will be variable dependent upon seat quality, as would be expected.

The stadium is open-air, but will have a roof over the entire structure, and will be completely air-conditioned. The entire playing field will be covered with artificial turf, which will allow for rapid changes in surfaces to accommodate events other than football, e.g. motocross events or concerts. The stadium will also be used as a venue for regional collegiate football games, Super Bowl, and other events that potentially attract large numbers of people; it will have a capacity of 72,400 seats.

At the present time, the stadium is structurally complete, and what is left will be an installation of the seats, bathrooms, and other finish work. The stadium is owned by the Rams organization, who obtained $5 billion of private funding for its construction. It will also be home to the L.A. Chargers football team, who will be operating on a 20-year lease, with other options which may be exercised after 2040. 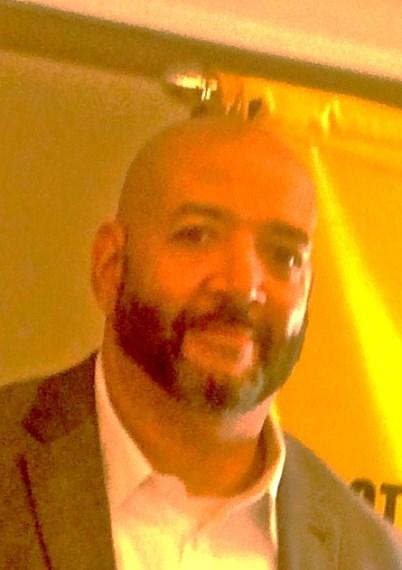 CLUB CONFIDENTIAL -- The Membership Committee and the Board of Directors have approved the application for membership of Kristen Deazeley, sponsored by Bob Wood; and Cynthia Strassman, sponsored by Mitch Mitchell. Any objections should be registered with Jeff Yeargain or Richard Swinney by September 19th, after which date the sponsor will be free to invite the candidate for membership. Spindrifts of Sept 12 and Sept 5 show their photos.

Norm Von Herzen won the Rams-sponsored drawing for two tickets to one of the Rams home games this season….Bob Wood was a recipient of the regular raffle ($20), and Bob Kinton walked off with Second Prize ($10). 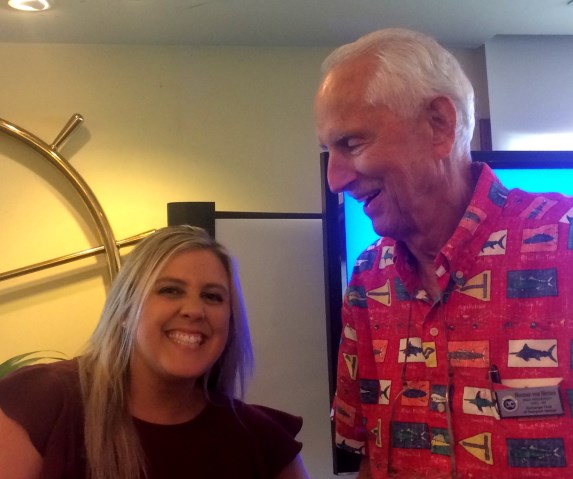 GREETER –
This week’s friendly face is Bruce Major, who, in the relatively short time he has been a member, has made a significant impression. Sponsored by Jerry Nininger, Bruce was a major worker at our Field of Honor program this year, and, in addition, he and his family were significant financial contributors. Bruce accepted the VonHerzen Challenge with a $1,000 donation to the O.C. CAP Center. Please honor Bruce with your contribution to the raffle! 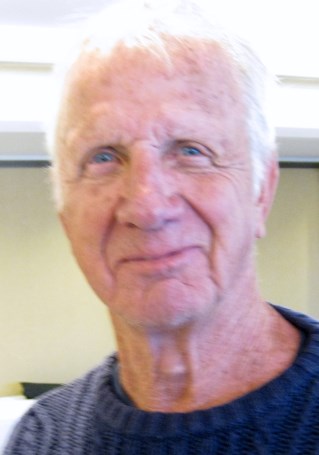