President Mike Gertner opened the meeting with his typical enthusiasm and welcomed Roger Summers to do the invocation, which was exceptionally complete. Member Marge Davis let us alertly in the Pledge of Allegiance.

Ed Romeo encouraged us to attend the Deane Bottorf memorial service you have been invited.
Shirley Lashmett offered flyers for signing up for the upcoming District Convention August 27-29 (Friday-Sunday) at the Hampton Inn in Lake Forest, right off Interstate 5. Highlights include the ACE Awards, the Installation and the Youth of the Year and Club awards. We will have flyers next week as well.

A motion was made, seconded to nominate Ken DuFour as a District Director for Area 3. The motion passed unanimously.

Fran Murphy and Gina Lesley enthusiastically brought to our attention the weekends in Palm Springs, organized by the Past Presidents. These were a lot of fun and were enhanced by Dick Hodge’s mai tai’s. We used to have lots of golfers and amazing places to visit, the street fair, and lots of time around the pool. Another possibility is a day event at Newport Shores instead of a weekend away. Please fill out the form and let us know if we’d like to do this once again. Please bring it next week!

Because the cooks are on vacation, we will be unable to meet at the BCYC for any meals for the next two weeks. See Page 1  for our meeting location this week.

Was “The Truth about UFOs” by me, your editor. A simplified summary follows:
How I got started. First talk in 1968, “The Giant Discoveries of Future Science.” Boss asked question, how to get to orbit in 10 years from now? UFOs! I read 50 books, executive meeting, got $500K to study how they worked. Asked to testify to Congress in 1969. Showed MUFON trophy for 24 years on Board of Directors.
My pastor said, “It would be arrogant to assume God could make only one intelligent species.”

Story of Bill Tompkins – starting 1936 at 11, he made fantastic models of Navy ships, got publicity, Navy found out, kept eyes on him, got him a secret job at Vultee, was “selected” before the Battle of LA when two craft were downed (Dr. Bob has original top secret memos, see www.majesticdocument.com ), then joined Navy, listened to what the 29 spies said was going on in Nazi Germany: 1936 Antarctica, caverns, internal power, Reptilian race, agreed to help Hitler, gave them 12 complete UFOs, drawings, many photos, underground production, not fast enough to win war, Germans moved to Antarctica to huge caverns. Bill was courier four years, hundreds of unbelievable debriefings .

Roswell crash and inadvertent release to the public caused the formation of the Air Force and Majestic 12, an oversight group committed to keeping the secret from the public, Sept 1947. Twelve people, four military, four academia, four government. Had five retrievals by then. Missouri 1941, 2 in 1942, one in 1945, Trinity, and Roswell. There were 73 crash recoveries in son Ryan’s book, Majic Eyes Only. we tried to figure out how they worked, used Paperclip personnel working on them in Germany.

Story of treaties. Summer of 52 overflights, Truman is coerced to deal with the Nazis and Reptilians, who promised help on technology. CIA sets up Area 51. Feb 54 Nordics approach Ike, ask for elimination of nukes, he says no way. Bikini test imminent. July 54 Ike signs with Greys, Tall Whites. They violate treaty. The leaked documents and Special Operations Manual are confirmed authentic.

The phone call. Bob Wood “retires”, teams with Ryan, publishes leaked documents, get mini fame in UFO world gets a call out of the blue and $500K. Publishes a TV documentary The Secret. 2007 approached by Bill Tompkins to write his autobiography. Published in 2016, $2K/month royalties. Things not mentioned: we have hundreds of deep underground military bases, multi- ple anti-gravity craft, dozens of aliens races identified, bases on the Moon; Germans got to Moon in 1942, Mars in 1945. US and Russia started a base on Mars in 1964. Trump set up Space Force, which will be recognized at the Field of Honor as one of the six branches of the Armed Forces. 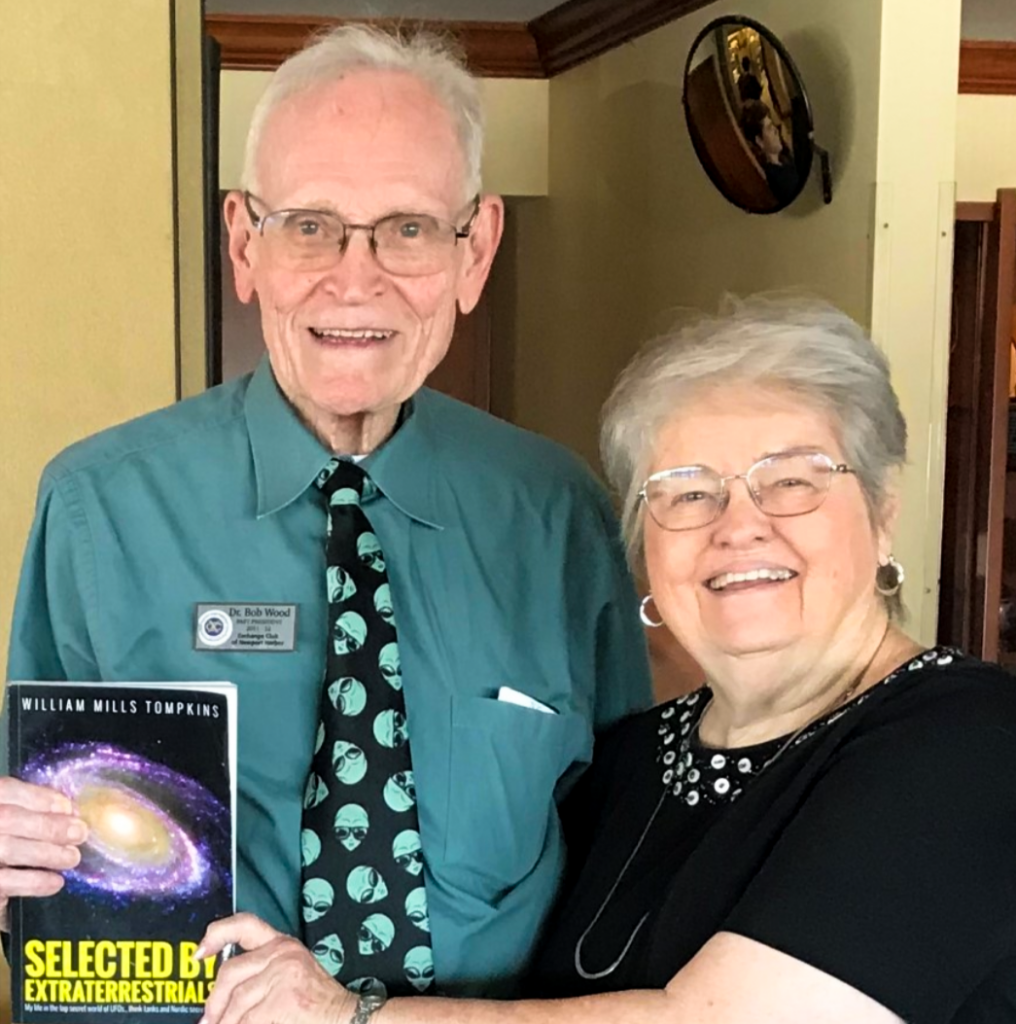 All attending got to take away a legitimate document from January 1989: Organization of MJ-12, Roswell crash detail, Aztec crash detail, conversations with one EBE, assessment of the situation as of 08 January 1989. A fascinating document to read.
During Q and A, Dr. Bob gave one wrong answer to the question: “Had he ever talked to someone who had a first-hand experience? He should have said, yes, he had heard first-hand reports from two people, his guest Jan Harzan and Wally Ziglar’s twin brother by phone

Luncheon meetings at the Bahia Corinthian Yacht Club have resumed, but we will be meeting this week at the Newport Rib Company, 2196 Harbor, Costa Mesa, between Victoria and Wilson. You will be emailed an invitation tomorrow. Please notify Richard Swinney by this Wed 2PM if you are planning on attending.