Our last luncheon took place at the Newport Rib Co. in Costa Mesa. There were 26 members in attendance. Pres. Mike Gertner opened the meeting by asking Leo Fracalosy to present his opening “prayer”. Leo gave an inspiring, completely off-the-cuff recital of Robert Frost’s “Stopping by Woods on a Snowy Even- ing” poem, containing the memora- ble phrase, “and miles to go before I sleep”. Leo reminds us of our duties and responsibilities as members of ECNH to ourselves, our families, and our community. James Vale then led us all in the flag salute. 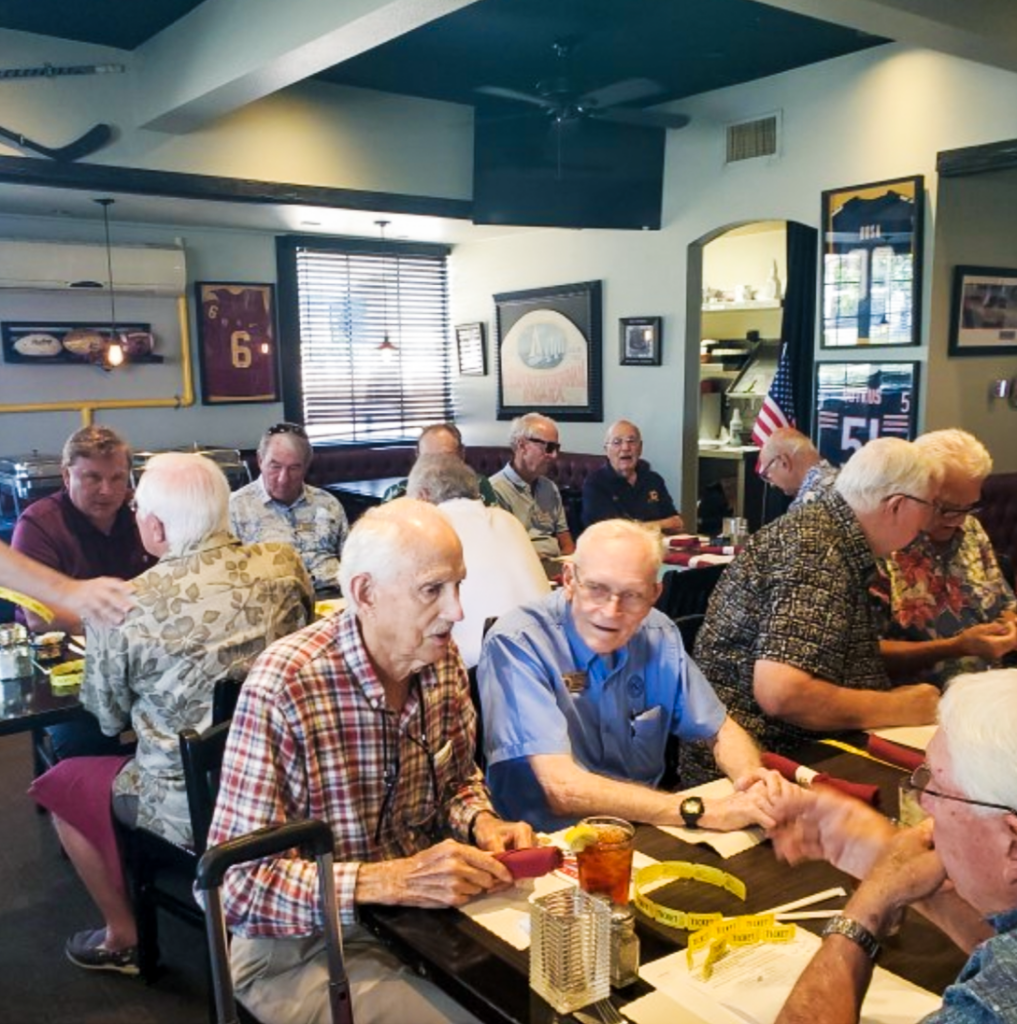 Some of the Gang at Newport Rib

The location of next week’s luncheon meeting has not as yet been finalized; so stay tuned.....Jeff Yeargain presented recent Covid information indicating that, the delta variant of the virus is widespread throughout Orange County and hospitalizations are increasing. Over 90% of the patients who are hospitalized are unvaccinated, which should give good reason for the unvaccinated to seriously consider getting the vaccine. Jeff advised masking when indoors, and discussed getting the N-95 masks, which are much more effective in protecting against the virus rather than the thin blue masks.

Pres. Mike introduced your current editor, Dave Schapiro, to pre- sent his “5 minute” life story, which he has entitled “Things You Don’t Know About Dave”: Dave was born on February 16, 1944 in Jersey City, NJ. “Not a particular important day in history except for my birth.”, he says. He is a second generation American, and is the oldest of three children. His brother, Marty, lives in Long Beach; and his sister, Judy, lives in Santa Maria. Both are retired.
All of Dave’s grandparents were immigrants who were processed at Ellis Island. His maternal grandparents were from Calabria, Italy; his paternal grandparents were Austro-Hungarian and Russian. His brother recently went on ancestry.com to confirm that we have genes which originate in Russia, Eastern Europe, Italy, Greece, and Turkey.

Dave’s parents moved to North Bergen, NJ when he was 4, where they lived until their move to CA in 1961.
Dave’s parents were intelligent, but neither of them was college educated. However, they had the common sense to instill in their children the value of an education, to which they are eternally grateful. His mom kept house, and was a good cook, especially with respect to Italian food. Fortunately, his mom relayed most of her recipes to his wife, Dennie, who is also a good cook.
Dave’s dad was a plumber, who ran his own business. When Dave was old enough, he would work with his dad who would pay him $1/hr during summers. Dave learned a lot about how to use the tools of the profession.

Dave went to public grade school, K - 8, at Lincoln #5, then went to High School at St. Michael High in Union City, NJ, a now-defunct school taught by the Sisters of Charity. His biology teacher in High School, Sister Jean Cecilia, was his mentor. Dave graduated with honors, but not at the top of his class, in 1961.
Within 2 weeks of his high school graduation, Dave’s entire family moved to California. The move was a little stressful for them, as they left their friends and most of their family back in Jersey. Dave was accepted at UCLA; but going from a small high school with a graduating class of about 120 to a sprawling campus of over 25,000 students was daunting. After 5 years of laboring at UCLA while living at home, Dave attained his B.A. degree in Zoology in 1966. Dave was then accepted to the UCSF School of Pharmacy. 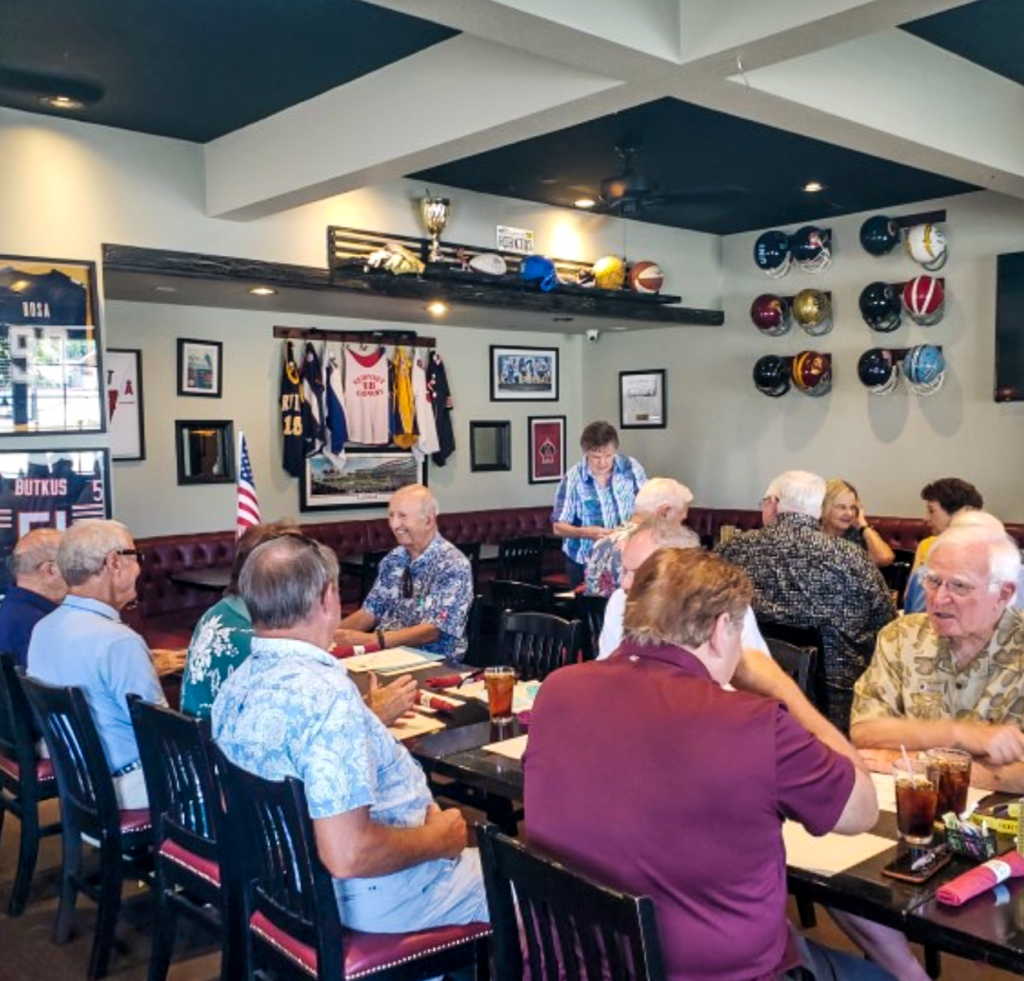 More of the Gang at Newport Rib

Dave never served in the armed forces; he had an educational (2-Y) deferment. Dave’s involvement with our Field of Honor is and has been his way of paying forward for the honorable military services of his brother, uncles and father.
After licensure as a registered pharmacist in California, Dave spent a year in graduate school, and then landed a job at what is now known as UCI Medical Center, where he was employed
for 22 years. In 1993, he accepted a position as a compounding pharmacist at Steven’s Medical Pharmacy in Newport Beach where he spent another 25 years, retiring in 2019.

Despite his long career as a pharmacist, Dave feels that his greatest accomplishments in life (with the help of his beautiful spouse of 52 years), are his two boys: Aaron, age 48, who is a practicing attorney in Burlingame, CA; and Michael, age 46, a hippie CPA practicing in Eugene, Oregon, who is father of our two grandkids: Pablo (12), and Nyah (8). 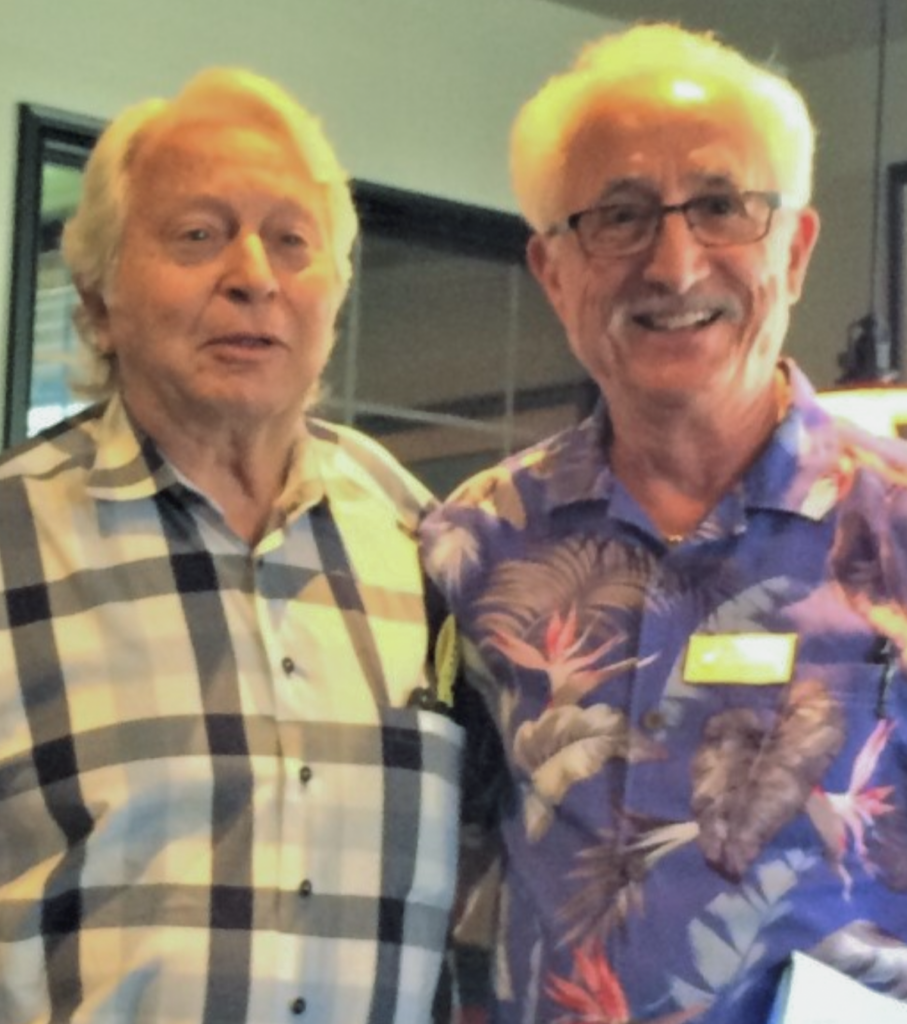 Dave has been a member of ECNH since October, 2017, and was invited as an honored guest by
his good friend, Ken Dufour. His first experience
with ECNH was at the Field of Honor, and it presently is his favorite event.

One of Dave’s objectives as an active member of ECNH is to improve its relationship with the community that it serves. His goal as Chair of Public Relations is to make Exchange a household name; and in doing so, its membership will increase. He’ll probably be trying a number of strategies to accomplish this, including the use of advertising in local media to inform our community about who we are and what we do.

Dave selected the two winning tickets of this weeks’s raffle. The recipients were Leo Fracalosy and Marj Davis. Each got $30. STAY SAFE! - DS

Meeting Place this week: Newport Beach Yacht Club, on the corner of Bayside and Jamboree, 1099 Bayside Drive, valet parking available
Please notify Richard Swinney or Bob Wood by this Wed 2PM if you are planning on attending.