LUNCHEON MEETING
We were back to having our lunch served outdoors on the BCYC central patio on a very pleasant (albeit slightly smoky) day. Thirteen of our members chose to attend, and seven participated on Zoom, moderated by our Zoom Coordinator, Steve Pool. Pres. George Lesley began with a prayer asking for protection of all the homes, including Pres-Elect Mike Gertner’s home in Silverado Canyon, which was in the line of the most recent fires which have been scourging Orange County. (Mike left his home at 4 am last Thursday via a mandatory evacuation order, and the status of his home was pending). George also asked for protection for the firefighters.…. The salute to Old Glory was led by Dave Schapiro.

FOOTBALL POOL
Our esteemed Football Commissioner, Mike Gertner, was finally able to give Seymour Beek his winnings from Week #2. He presented the results of Week #7: Kirk Summers was the low man and his father, Roger Summers was the winner, with second place being shared by Dr. Bob and Leo Fracalosy.

ANNOUNCEMENTS
The ECNH Executive Committee has decided that our weekly meetings will convene at the BCYC each week, and we will continue to have meetings either inside or outside on the patio, depending on the restrictions that we are forced to deal with at that time... In either case, please notify either Secretary Richard Swinney or Treasurer Dr. Bob if you are planning on attending each week…..Ken Dufour announced that the Priority Center is still looking for additional contributions for their Families Helping Families campaign. Richard has also asked that interested members assist the Priority Center in handing out the food packages that have resulted from ECNH and individual member contributions. The package distribution will occur on Saturday, December 12 at 15362 Graham Street, Huntington Beach. If you would like to participate, visit the Priority Center website, www.theprioritycenter.org, scroll down to Families Helping Families, and click to volunteer… For those inclined to donate toys, you can drop off unwrapped new toys at numerous locations, including the Newport Beach Civic Center, Oasis, Newport Beach Library, N.B. Fire Department, N.B.P.D… This week’s trivia answer, presented by Pres. George, involves the Tomb of the Unknown Soldier, located at Arling-ton National Cemetery in Fort Myer. The soldier guarding the tomb takes 21 steps, and then pauses for 21 seconds before reversing his course in reference to the 21- gun salute, the highest honor given to any military or foreign dignitary…..PLEASE NOTE: There will be no meetings scheduled for December 24 and December 31.

PROGRAM
Our Speaker of the Week was Bob Rotstan, who is with the Wells Fargo Advisors Financial Network, LLC, headquartered in Irvine. Bob is the financial planner and manager of our Club’s investment portfolio, and has been overseeing a rather remarkable recent asset performance. In relation to the percentage of annual returns for the S & P over the last 100 years, the S & P is approaching a greater than 50% annual return this year, which has happened during only two other years, in 1933 and 1954. The methodology which Bob employs is to sell securities when the market is going up and to buy when the market is going down. The result is that, in a down market, the loss in value of our investments has been significantly less than the market as a whole. In real numbers, when the market drops 10%, the value of our investments drops only about 4.2%. The downside of this methodology is that, when the market goes up, the increase is also less: about 80% of the market performance. The net result, however, is that we have been the beneficiary of one of the top-performing market methodologies. The Club’s investments are currently about 50% in equities and the remainder in bonds T-bills, and cash.

Right now, the S & P is up 13.69% for the year, and the Club’s investments are up about 14%, so we are still running ahead of the S & P. In real numbers, our assets are currently greater than what we initially invested in January 2016, despite our having withdrawn significant funds for our charitable contributions over the years. Most of the equitable investments in the account are comprised of Exchange Traded Funds. Bob doesn’t time the markets: all of the buys and sells are based on statistical probability. A 3% drop in the market triggers a “buy”; likewise, a 3% increase in market value will trigger a “sell”. 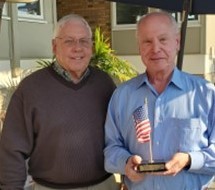 Nobody knows the ultimate effect the 2020 elections will have on the markets. If Biden is elected, but the Senate remains Republican, there will probably be very little change: there will be no packing of the courts, no change in the tax laws, etc. If the Senate goes Democrat, potential changes may include an increase in Capital Gains tax of up to 40%, an increase in estate taxes; the treatment of capital gains as ordinary income; and an increase in corporate taxes of up to 20%, which may result in the migration of corporations outside of the U.S... To obtain more information, please contact Bob at 877-905-5202.

Ed. Note – Please note the Schedule of Events on the next page for important updates. Be Safe and Stay Healthy! D.S.