With the promise of meeting indoors, we had excel-lent attendance of about 20 people. We planned on meeting indoors but unfortunately we were misinformed and we met outside on a very chilly day! 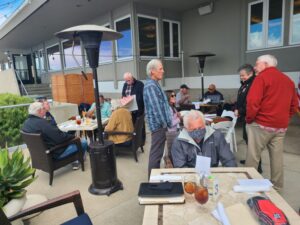 We’re told that we will be meeting indoors on the 18th though and we’re looking forward to that!

Some of our usual zoom attendees showed up for what we thought was an indoor meeting so we only had three people on zoom. We were very glad to see our very own Deane Bottorf on the call! WC Fox and Garry TeWinkle were on the zoom with him. It’s good to see you all on the call! 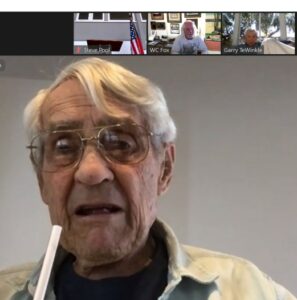 President George Lesley called the meeting to order and began with a quiz about Saint Patrick's Day, an Irish holiday we celebrate on March 17th. The first celebration was in 1762 in New York. Currently St. Patty’s is iconicly celebrated by dying the river in Chicago green. It turns out we’re celebrating a man who wasn’t a saint and not named Patrick! His seminary name was Patricious and he was British, go figure!

Richard Swinney announced that the Field of Honor will not be full blown this year. We are hoping to have 1776 flags in Castaways as we usually do and maybe student artwork and banners to advertise the limited celebration from May 14 - 31. We have commitment for 12 - 15 Marines to install and take down the flags for the event.

Cynthia Strassman announced that Friday the 12th was the final submission date for ACE applications. Jerry Nininger told us that they’ve selected 8 Youth of the Year and are waiting to schedule awards once we are reliably meeting indoors again. 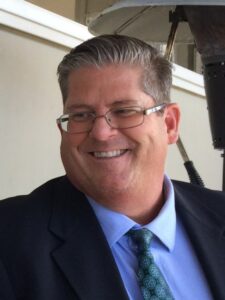 Michael taught at Back Bay for 9 years, became Assistant Principal for about 5 years and has been Principal for the last 2 years.

At Back Bay High School they are focused on the positives rather than negatives. Their emphasis is on removing barriers to graduation and getting students to attend is the most important factor. Key to this is building relationships for discussion regarding choices. Beyond the students’ choices, they are sometimes victims of poor adult decisions in their household.

Over the years, thousands of students have passed through Back Bay. There is much heartache and greater reward as kids shift. They grow and begin to mature but often think they know more than they do.
Attendance rewards are helpful, certificate of attendance and monthly lunches provide incentive for improved attendance. It brings a sense of accomplishment. Food is a great reward for teenagers.

With District funds, they bought a great barbecue grill to feed the kids. With the pandemic and remote learning, they’ve had to use certificates to In-n-Out and Cane’s. They’re looking forward to getting back to the barbecue where hot dogs and a bag of chips to have among friends becomes the incentive again.

With our very own Cynthia Strassman’s involvement at the school, they’ve developed a PTA. They now have a “Student Spotlight” with teachers recognizing students and creating a greater sense of be-longing. Relationships are key.

Cynthia has created a career exploration board to highlight the availability of trades as an alternative path to a four year degree. They are just beginning to promote this and have a construction webinar showing “how to” and types of jobs.

Mr. Wagner told us of an old friend who got a certificate in landscaping and went on to have a successful career. Ed Romeo shared that his daughter had a very difficult time until she went to Back Bay. From there, she pursued a career in respiratory therapy and has had 30 years of success. Avenues into trades and two year certificates are important for these students. 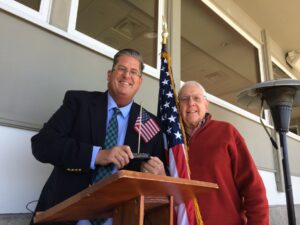 Since the second week of November, they’re meeting in classroom 4 days teaching every week with Wednesdays being a distance learning day. Prior to that, they were full time distance learning. Distance learning is very hard on Back Bay students. From September to November 84% of the students were failing one or more classes
Back Bay relies upon District and State funds and they’re thankful to have gotten the barbecue… breaking bread with one another means a lot to everyone at the school.

Music and the arts have suffered during the pandemic. Ceramics is very popular and therapeutic as well. Doing things on the computer hasn’t been successful.

Thank your for the great talk Michael!