President George Lesley, having just returned from the Big Island, opened the meeting with a request that everyone be vaccinated to further reduce the restrictions which have put the clamps on our lifestyle over the past couple years; and that we respect others and follow the Golden Rule: “do unto others…” Mitch Mitchell led the attendees in the flag salute. About 50 were served lunch at the Bahia, including guests; and students, parents, and school counselors who were present for our Youth of the Year Awards (YYA) ceremony. Three of our members joined us on Zoom.

Before and while lunch was served, President George entertained us with a brief trivia quiz, including the following answers: The highest peak in the world when measured from its base under the ocean is Mauna Kea, on the island of Hawai’i (Ed note: It is actually the second-highest, with the highest being Puncak Jaya on the island of New Guinea, Indonesia)…..A furlong is 1/8 mile; the Kentucky Derby is 10 furlongs, or 1 ¼ miles…..Babe Ruth holds the record for hitting more home runs by the time he reached the age of 26…..Rubic’s Cube was the creation of Erno Rubic, a Hungarian…..The capital of Delaware is Dover….The only word in the English language with three consecutive sets of double letters is “bookkeeper”.

President-Elect Ken Dufour congratulated the 6 student recipients of the YYA who were present. He introduced our hard-working chairperson of the event, Jerry Nininger, and additionally gave him credit for initiating our Field of Honor event 12 years ago…..”The FOH is ECNH’s tribute to our flag and to our country, when 1,776 American flags will be flying at Castaways Park between Armed Forces Day, May 15th, and Memorial Day, May 31st.” Ken invited all to come out and view the display; he mentioned that the event is a fundraiser, where 50% of net profits will go to veterans’ organizations, with the remaining funds used to support child abuse prevention, college scholarships, and other local charities in need…..Next week’s program will be our Accepting the Challenge of Excellence (A.C.E.) Awards Ceremony. Event coordinator Cynthia Strasmann stated that ten students from the Newport-Mesa School District will be recognized and awarded $3,000 scholarships to help with their college education.

President George brought up Jerry Nininger to present this year’s Youth of the Year program, a recognition of some of the outstanding, high achieving graduating students in the Newport-Mesa School District. This scholarship is awarded not only for academic achievement, but also for involvement in extracurricular programs, including volunteer work, music, sports, school clubs, school newspaper, theater arts, etc.. The recipients of this year’s awards were, from Corona del Mar H.S., Troy Tsubota and Tara Zadeh…..From Estancia H.S., Elsa Cuenca-Rubio and Lucas Pacheco…..From Newport Harbor H.S., Isabel Glassen and Lucas Gretler…..and from Costa Mesa H.S., Catherine Pham and Luka Gogorishvili. (Catherine and Luka did not attend the luncheon.). The principal of Newport Harbor, Sean Boulton, preceded the introduction of the students at his school and thanked ECNH for our support and congratulated all the recipients. This year’s student winners collectively have been very active outside their coursework; all are taking advance placement classes which will allow them to obtain college credit before enrollment at the higher education level. U.C. Berkeley, Cal Poly Pomona, Cal Poly SLO, and Marion University in Indianapolis were among the institutions that these honorees are planning to attend. 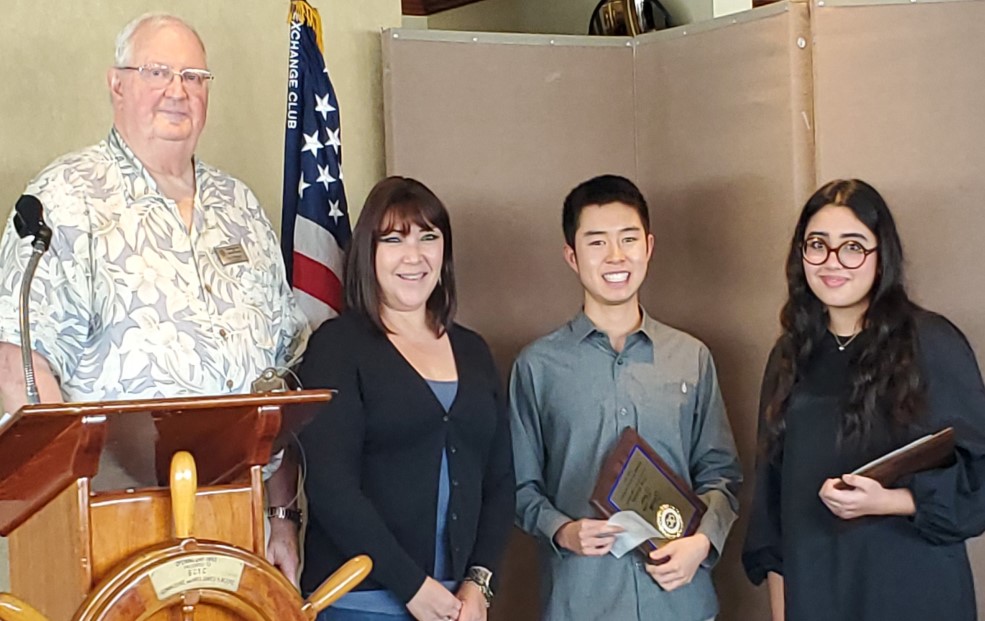 This week’s raffle winnings were split between two lucky members, Buddy Ryan and Leo Fracalosy, both of whom walked away with over $50 each. Kudos to Exchange District Pres., Shirley Lashmett, who sold a significant portion of a roll of raffle tickets this week!

With the significant decrease in the number of cases and hospitalizations, we are seeing a gradual opening up of businesses and entertainment venues. Restaurants that have remained opened are getting busier and some have resumed indoor seating. Traffic on our freeways appears to have returned to pre-pandemic levels. The rest of the country, however, still has hot spots where COVID cases are increasing, so this isn’t over yet. Moreover, other countries, especially third-world countries such as India, are really having major problems. I still advise staying the course and following the CDC recommendations whenever possible. This means wearing a mask, particularly when indoors among large groups of people; and using common sense.

Luncheon meetings at the Bahia Corinthian Yacht Club have resumed, with indoor seating in one of the banquet rooms. Lunch will be served at 12:20 PM. Meetings will also be broadcast on Zoom. You will be emailed an invitation the day before the meeting. Please notify Richard Swinney if you are planning on attending.