Pres-Elect George Lesley began the meeting by introducing Immediate Past President Richard Swinney, who gave the invocation, followed by the salute to Old Glory, again led by Deane Bottorf. George then informed the membership that the flag salute was written in 1892 and implemented in order to unite the country which was still in recovery mode from the Civil War.

NEWS AND VIEWS – SAVE THE DATE for our annual Christmas party at the Fracalosys on Saturday, December 7. A signup sheet will be available again next week. Our next meeting on November 21 is scheduled for a Business meeting; so, please, no guests…..Thursday, November 28, is Thanksgiving; so, no meeting is scheduled: Happy Turkey Day!

ANNOUNCEMENTS – Bob Kinton dis-cussed “Families Helping Families”, a program sponsored by the Orange County Child Abuse Prevention Center. A signup sheet was passed around requesting cash contributions for the purchase of gifts. In addition, Richard Swinney indicated that their holiday program, which will include presentation of gifts to children of families in need, will be on December 14 and 15. Those who would prefer giving a wrapped gift can do so. The program is also in need of “elves” and a Santa: if interested, please contact Richard.

Mike Gertner introduced his Honored Guest, Roger Summers, who is a local developer and contractor. Welcome, Roger! After the announcements, everyone lined up for the weekly grub.

PROGRAM – George Lesley introduced our featured speakers: Nancy Clark, CEO of Nancy Clark Associates, Inc., a State licensed, residential recovery and rehabilitation center certified for drug and alcohol treatment; and Hollister George, a counselor and manager of the recovery center, and director of the Road Home Foundation, a non-profit which is committed to assist individuals on release from jails and prisons in the transition to community life. 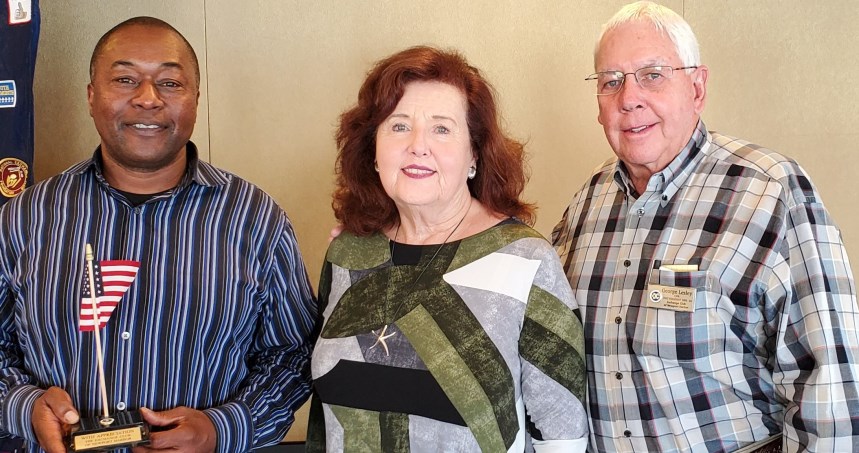 Mr. George was himself incarcerated for 21 years for a crime (2nd-degree murder) in which he was involved. For his first 10 years while in prison, he continued to abuse drugs, etc. and afterward began to realize that he would die while in prison if he didn’t change his lifestyle. There was no formal rehabilitation program available at the prison, so he began to rehabilitate himself. He studied the law and psychology, and had also acted as a tutor and counselor for other inmates while in prison. Hollister was released by a Federal judge in 2010. On release, he was not able to establish residence with his relatives, who were not financially able to afford him. It was at that time that he established a relationship with Nancy Clark and with the Road Home Foundation. He has continued to study and has obtained his Associate of Arts degree from Cypress College, along with a certification for drug and alcohol counseling. The combination of what he learned while incarcerated and in his studies since his release has prepared him well as a counselor and manager of the Road Home Foundation.

Road Home does not offer treatment: they have no counselors. All treatment services are performed at the Recovery Center. What Road Home does offer are items which assist individuals released from prisons and jails to transition to normal life outside of prison walls. This may include obtaining diapers for the children of these individuals or enrolling them in exercise programs, Medi-Cal, or other social welfare programs. The mindset of released inmates is similar to that of military veterans who reenter society. The majority of prisoners operate by fear or force; their image of respect is that of fear. Over time, inmates get used to living with tension (racial and otherwise), and they don’t understand the concepts of love and respect. In recovery, counselors work with them to change their mindsets to behave like “normal” people in society; to invest in their own lives to successfully transition to the community.

For Road Home, there is a lot of work that needs to be done, and the prime issue is financial. Released inmates often present to Recovery in the clothing they wore while in prison. Their needs, which were for the most part taken care of while incarcerated, need to be addressed, and Road Home offers options, e.g. community service programs, etc., to ease the transition.

RAFFLES…Dr. Bob announced that the club was again the winner of the most recent Football Book Pool…..Mike Gertner announced the winners of the Week 11 “Other Football Pool. The big winner was Seymour Beek ($32); second place went to Pres. Ken DuFour ($5); and this week’s low-ball winner (?) was Jeff Yeargain ($3), who, interestingly, was the big winner two weeks ago…..The weekly raffle winners were Shirley Lash-mett ($20) and Ed Romeo ($10).

GREETER – Our next greeter on the schedule is our Immediate Past President, Richard Swinney. Please support our raffle this coming week with your $2, and say hello to Richard while you’re at it!.